Another staple of the Paraguayan diet is poroto ('kumanda' in Guarani), a type of bean. Demetria's son's garden produced a lot of this back in March/April time.. Here you can see the vat of dried bean pods and the shelled beans. 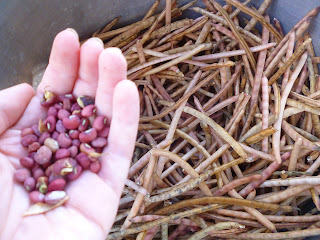 Empanadas are a little bit like miniature cornish pasties, and can be purchased round the corner (any corner) for 1000 guaranies, which is approximately 12p.

A step up from this is making your own, for which you need a mould. 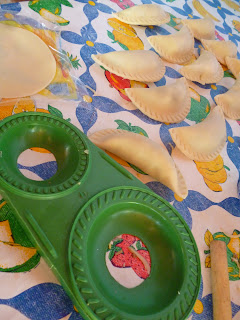 You can buy minced meat to make the filling with, or you can grind it yourself, as pictured here, which tastes better (apparently). 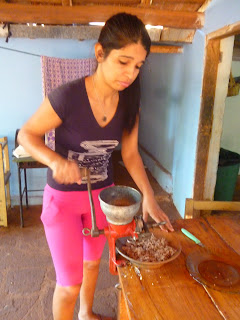 Similarly, you can use pre-made pastry circles (as above) or you do that part yourself too, as my friend's mother did for his nephew's birthday. This involved putting the rolled-out dough through what looked like a mangle. 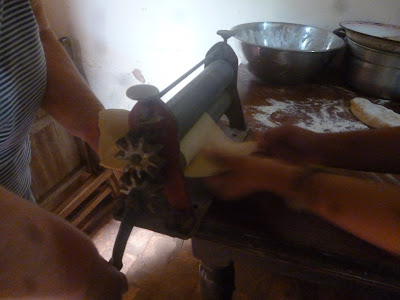 They are most commonly fried, but can be oven-baked too. 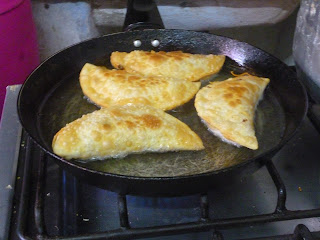 Last week brought a traveller from a distant and dream-like land... Thea, constant of my Cambridge schooldays and now a Real Grown-Up with a Real Job in the Real World zone of Oxford.

We found each other at the bus terminal in Encarnación (about two and a half hours from Santa Maria) and took rather more rickety bus for three hours to Ynambu, to visit the San Rafael nature reserve. We were supposed to be picked up there and taken the last 10km to where we would be staying, but as it was RAINING, our hosts assumed we weren't coming, didn't appear and were unreachable by telephone. An auspicious start. We were saved by serendipitous circumstance: a Paraguayan friend of mine happens to have a brother who lives in this specific tiny and remote village, whom I miraculously managed to identify based on the information that he was bald and looked a bit like my friend - the population is small enough that I think most of it walked across the square in the couple of hours we were sat there waiting. His neighbour ferried us to our destination, the sun came out and all was well.


The reserve is dedicated to the conservation of part of the remaining 7% of the South American Atlantic Forest, a kind of temperate rainforest. We saw some colourful birds, including toucans, and some monkeys in the distance. Thea was excited by armadillo holes (in Guarani tatukua, not to be confused with tatakua - points to anyone who remembers what that is), but the beasts themselves did not show themselves, alas. The plants and trees were also interesting, even to the untrained eye (me).

Devoted or hungry readers may recall this post from Vienna in which I made Schnitzel with my Austrian-Peruvian friend Milena. As it so happens, a typical Paraguayan dish known as Milanesa is essentially exactly the same thing, although with Paraguayan meat, flour and breadcrumbs it tastes a little different. Here is pictorial evidence!

The midwinter feast of St John the Baptist on 24th June (yes, more than a month ago) is celebrated throughout the country with a huge range of games and traditions. Margaret Hebblethwaite's Bradt guidebook has an exhaustive list; I'll quote a few highlights:

"paila jeherei - trying to remove a coin stuck with grease on the back of a frying pan by licking it"
"climbing the greasy pole, or yvyra syi (Guarani 'tree slippery'), in search of a bag of goodies tied at the top"
"gallo ñemongaru" - a cock is starved for 24 hours and then released in the middle of a circle of girls with maize in their hands. The one the cock eats from first will get married that year.

culminating in the What-is-this-Health-and-Safety-you-speak-of FIRE GAMES:

"kicking around a pelota tata (Spanish 'ball', Guarani 'fire') - a ball made out of cloth, soaked in kerosene and set alight. The game is to kick it directly at your friends, who run away screaming."
"toro kandil (Spanish 'bull torch')...One or two people get under a cloth representing a bull, the horns of which are set alight, and then they charge at other people, who run away screaming."
"undas kai" (Spanish 'Judas', Guarani 'burn')" - the burning of a straw effigy of an unpopular figure (could be a politician or the footballer who made Paraguay lose against Argentina) hung by the neck from a gallows. "The figure has been previously drenched in kerosene and may be stuffed with explosive fireworks".
"the custom of walking barefoot across the glowing embers of the remains of the bonfire...According to legend, the feet are protected from burns if you do this on the night of San Juan. I have seen it done and there were no burns."

Santa Maria's festival was sadly rained off, but the kids from across the road (including the four-year-old) did their own pelota tata in the street. 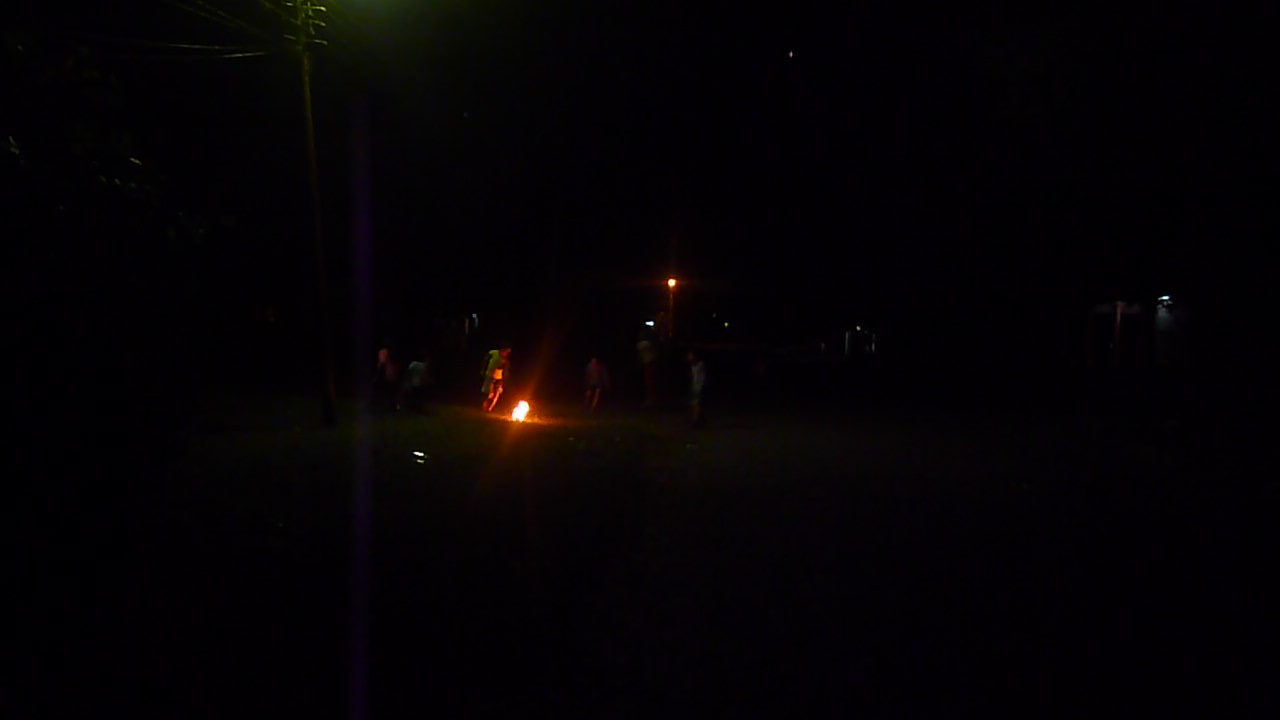 Anniversary of the Comunidades Cristianas

Santa Maria is split into four neighbourhoods, each of which has its own Christian base community ("Comunidad Cristiana"), a group that meets during the week at the homes of the members. The surrounding villages also have their own communities, which are particularly significant there as they only have mass once a month. 31st May was the anniversary of the Comunidades, which was celebrated with a special mass and an "acto folclórico" and bring-and-share meal afterwards. 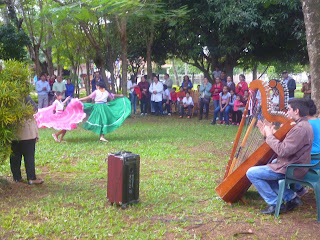 Two girls from one of the neighbourhoods danced to "Pájaro Campana". In typical Paraguayan style, the USB stick turned out not to have the right music on it - however, two of the Paraguayan harp students stepped in to play the piece, which of course they happened to know off by heart!

The girls from my community and I danced to Isla Saka quite successfully, after a series of rather chaotic rehearsals. We were decked out in full Paraguayan traditional dance costume, which was quite exciting. Lelis, who also masterminded the choreography, danced with her water jug balanced on her head.

The end of the road

I have less than a month remaining in Paraguay...

As ever towards the end of a stint abroad, life has suddenly become very busy. The past two weeks have been holidays from the English classes, but filling up the free time has not proved difficult! Apart from a trip across the border to Buenos Aires, I took the opportunity to go and work at two of Santa Maria's cooperative projects, the sewing workshop and the medicinal herb garden.

All this has resulted in a dearth of blog posts, but I am hoping to catch up a bit over the next week (when Thea is coming to visit!). Some will be very out-of-date, but I think still of interest. Watch this space!

I've set up this blog to chronicle my Year Abroad for posterity/myself/anyone who is interested. I'm aiming for short, sweet and varied.

This is the plan:

PART ONE: VIENNA, AUSTRIA
*August 2014
Part-time internship at the Latin American Institute
*September 2014 - January 2015
Internship at the Centre for International Relations at Vienna's University of Natural Resources and Life Sciences

I will be back in the UK briefly over Christmas and at the beginning of February 2015.

VISITING
Please do let me know if you are visiting Vienna (or Paraguay!) while I am there. If you live near Stansted and would be likely to fly, there are Ryanair flights to Bratislava which is a cheap bus ride away (about 1 1/2 hours).
I can potentially accommodate one or two people in my room on the sofa/floor.